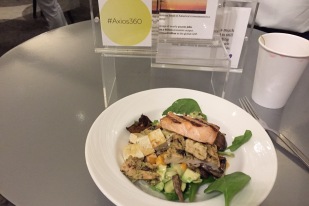 One of the great pleasures of living in the Nation’s Capitol is the chance to seeing  legislators in the flesh and hear their words without any media filter.

This can be good or bad depending on your thinking. If nothing else, you hear tidbits that don’t make into news articles.

Yesterday, I went to a noon meeting with Democratic Senator Amy Klobuchar and Republican Vice-President Mike Pence at Axios. It was televised on C-Span if anyone wants more detail. In this case they served really good healthy food – salad, salmon, chicken, salad, quinoa, and avocado.

Senator Klobuchar is from Minnesota. She has sponsored the Honest Ads Act along with Senator Warner (Virginia), and Senator John McCain (Texas). She wants online advertisings having to follow the same rules as print ads in transparency.

Just as interesting was her casual comment about applying anti-trust laws to the online travel industry. This would be interesting Unfortunately C-Span doesn’t have a clip on this discussion.

On a lighter note, she’s a supporter of the popular sport of curling.

My interest in seeing Vice President Pence was spurred by many comments by friends which basically demonizing him as a bad man.

That wasn’t the way he came off to me. He was bland and stolid, the perfect balance to the President. Very vanilla pudding without any additives.

He spoke on visiting the Olympics and “ignoring” the sister of North Korean leader Kim Jong Un. “I didn’t avoid the dictator’s sister; I ignored her.”

He went on to discuss the Russian meddling in the 2016 election, repeating twice, at the start and the end that it had “no effect on the 2016 election” and that the intelligence community was “…. confident of the election results of 2016.”  My takeaway: The vice-president doth protest too much. I think the results were indeed skewed by the meddling. Whether it made a difference in the winner, is up for debate (which I am not getting into.)

He was asked what does the media get wrong about Trump? He replied, “The man has a very big heart. (He) loves his family…. Just look at (his) devotion to his family and  his family to him.”

He also he spoke of being upset by comments on the ABC show “The View” which compared “my Christianity with mental illness.” He says he tries to start the day reading “the Good Book” (the Bible) and his “faith sustains him.” He felt that the comments demonstrated how “out-of-touch” was the show was with people.

My takeaway: People need to realize that there’s a human being at the other end of their comments, especially on something as personal to Pence as his religion.

He also said he was a booster about space travel and NASA. “We’re going back to the stars.”

Finally, at the end, in a lighter moment, he says he wanted a motorcycle for Father’s Day since both he and his wife ride them, but instead he got a puppy… which he named Harley.

This entry was posted in Uncategorized. Bookmark the permalink.