I put off this review for three weeks but it’s hard to imagine that anyone who wants to see it hasn’t: 1) found a way, 2) or inadvertently, read spoilers. If you want to avoid this review, go ahead. Yes, there is a discussion of the Big Death. Spoilers!

Since, we now live in a world of binary opinions: “I LOVED it,” “I HATED it,” “You’re WRONG,” “Why weren’t the bacteria given positions of power with flashy buttons and a miniseries?”, “Because the oysters got it!”, etc., let me say that I don’t see the world that way. My worldview has dozens of shades of gray.

My first Facebook posting said, “I miss George Lucas” and that I’d explain that comment later. I still stick with that succinct review for “The Force Awakens (TFA)”.

First of all, I loved that the world of “Star Wars” has visually come back to life. (Saw it in 1977 and never looked away.) I like the new characters and the acting. Some of my favorite parts are the small touches of acting: Chewbacca handing Han Solo his winter jacket because he knew his human would forget. The Resistance fighter, Poe Dameron, looking around the Star Destroyer with the expression of “OMG it’s big!”

The people who built this world came out of the love of “Star Wars,” and many like director J.J. Abrams, are fans. They knew their work would be shredded, analyzed, discussed, become part of modern culture (not just media culture.) “Star Wars” fans reach from the White House to the casual person standing at Best Buy trying to buy a television.

On the other side, I also thought TFA put checks against the modern fans’ “list” of what they wanted.

TFA carries the SW plot forward (check!) It gives a younger generation their own heroes with Rey, Finn and Poe (check!) It answers the fans’ displeasure at the lack of women in the Rebellion/Resistance (so now it reflects the reality of military forces of many modern countries.) (check!) General Leia Organa is in firm control of the Resistance. (Good. About time. check!) 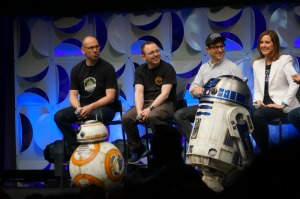 For travel possibilities, Luke Skywalker’s stone refuge in Ireland (where the locals are prepared for an influx of “Star Wars” fans tripping over their robes on the way up to pose for pictures. I’d recommend they import a lot of Disney products as well like Bandaids.)

Then it gives us the death of a major character in a not particularly well justified plot twist.

You’re not supposed to say “I don’t believe he’d do that” when confronted with the death of a major character who has basically carried a lot of “The Force Awakens” on his shoulders.

The Han Solo we meet in TFA is a practical man who knows his son is terribly troubled. He knows how his son feels about the family – negatively. I’m certain he knows what Kylo Ren’s done, his reputation, and keeps track if only to avoid the boy.

Solo has also seen what happens with lightsabers. They kill people.

So when he walks out to try to redeem his son (who carries a flashy lightsaber) on the basis of an appeal to familial love, well, huh?

It wasn’t his death that surprised or disappointed me; it was that the movie’s characterization of the older Han didn’t led me believe that he’d act so suicidally.

Han Solo’s costume from “The Empire Strikes Back” on display at “Star War: Celebration” in 2015

(On a side note: Han Solo was the most approachable of all the major characters in the original series and he continued that way in TFA. He, as the adult, also changed over the movies the most. Luke and Leia were very young and probably took their life changes more easily. Solo changed his mind about smuggling, joined the Rebellion, fell in love, had a child with Leia, fell out of love, left — Solo had a normal human life where things happen.)

So, why do I miss George Lucas? Because he would have given us something different.

It’s common and easy to whack at George Lucas for his characterizations whether or not you’ve even seen all the films. (I know too many of you out there who haven’t watched but opine endlessly anyway.)  For all the flaws of Episode I-III, they introduced viewers to new sophisticated cultures. They faced the problems of governments, trade, ancient history, religions and conflict. (They also had clumsy dialogue and over-use of computer graphics which detracted from the stories they told but I digress. I really enjoyed ATTC.)

And that’s what I miss in “The Force Awakens.” Something really, really new.