And… we’ve achieved a new TV 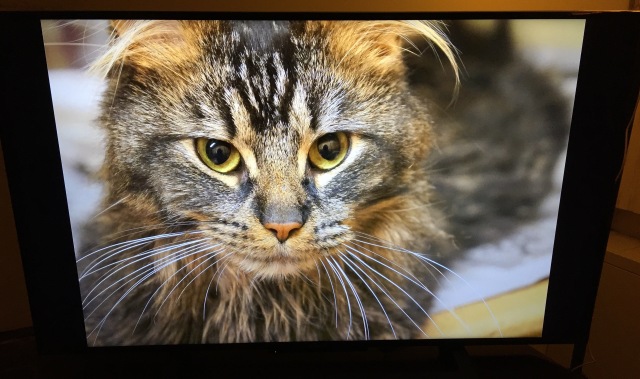 After dragging my friends out to Best Buy and having intense discussions with an employee (which degenerated into an agreeable political discussions because this is the Washington DC area), I ended up with a new television.

What kind? Well, that’s the payoff for reading, isn’t it?

Partly because this is the conclusion of a lesson on how to buy a new TV, here’s what went into the final decision.

I spent at least an hour on Amazon and Best Buy websites, discovering that they both were pushing the 50″ really hard as their Super Bowl sales. Going down to a 49″ or up to a 55″ was hundreds more.

That did make the choice easier. When the cost is exactly the same, then you know what you can buy.

The next question was weight. I admit that after seen the young athletic Best Buy salesman lug it around, I though it would be lighter than it was. Not true. He was just stronger than his lanky build showed.

For $100, I could get the Best Buy Geek Squad to deliver it and set it up. However, that would be a two weeks wait. I ended up having it put in my car trunk, after measuring said trunk to make sure it would fit, I then maneuvering the TV’s box on a cart and wheeled in. It was therefore safely delivered for no cost.

Weight was still a problem in that the old Sharp had to go to another room, then the new television put in its place. A good friend came to my rescue. We moved the old and set up the new one.

By the way, all the measuring of the room’s layout was worth it. The televisions fit exactly where they should go.

Oh, you mean after all the angst in the former posting that I couldn’t see the Sony screen because of reflections? Well, the screen’s not shiny enough to reflect, and, besides, I decided that if I had to worry about reflections, I should just get heavier curtains. Easy fix.

Setting it up was fairly easy with the ability to plug in the old DVD player. I dug up the passwords for Netflix and CBS All Access, and they worked. The built-in antenna is helped by the current antenna so I can get stations that had dropped off the old Sharp.

I used the USB to get my cat picture.

So, my new Sony, welcome to the family. I hope to view you for years to come. I even promise to dust you.

(Oh, and the stunning kitty above? His name is Loofa. I hope he’ll get a new human soon.)

This entry was posted in Cats, Uncategorized and tagged television. Bookmark the permalink.