Local news media held their annual Journopalooza  – Battle of the Media Bands – at the Hard Rock Cafe in D.C.

Translated that means that a solid crop of Washington’s reporters, editors, television people and more came together to drink, socialize and dance for a good cause: supporting journalists in danger zones, conflict areas like Syria. The $20 (over the Internet)/$30 (at door) cover charge and any donations went to the Committee to Protect Journalists and Reporters Without Borders.

The bar at Journolapooza 2016 at D.C.’s Hard Rock Cafe

The bar was packed by a crowd whose ages ranged from the early twenties to their sixties. Beer and drinks flowed. Boxes of french fries were sold, free ketchup packets on the side. The conversation was mostly conducted by gestures since the music was so loud it was doubtful that you could hear anything being said. 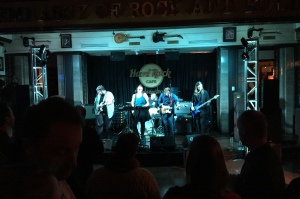 The group, Notaries Public, plays at the Hard Rock Cafe at the 2016 Journopalooza

According to the Committee to Protect Journalist’s 2015 report, 69 journalists were killed, many at the hands of the Islamic militants. Of those 69, “40 percent of the total killed in relation to their work.”

Journalism as a profession is in massive flux as old media twists and turns its way into a digital medium. Nicco Mele at the USC Annenberg School of Journalism points out that “some outlets are seeing the largest online audiences they have ever had, revenue is still shrinking.” This means fewer journalists on the beat.

On Friday night at Journopalooza, everyone was rocking down to the music efforts of hard-working journalists some of whom might not have a job on Monday morning. This was pointed out by a writer from Al-Jazeera America, who pointed out that it will cease to be a network on April 30, 2016.

Nobody’s Business plays at Journopalooza 2016. At the far end, Jonathan Landay of Reuters on lead guitar

Nobody’s Business had them rocking on the small dance floor to the point where a worker came out to mop up spilled liquor. People sang along with lyrics, and, in general, wound down from a week that included covering domestic politics (Hello, 2016 Presidential Campaign!) and foreign news (Hello, Fifa! (Huh, Fifa? What’s that?))

Boxes were put out towards the end of the evening so people could vote for their favorite band. (If I find out who won the battle and how much they brought in, I’ll update this blog posting.)

Journopalooza started in 2009 with a concert at the National Press Club.

A 2016 flyer said that a Journopalooza Fund is being created to “create franchise opportunities for charities to showcase journo talents at fundraising events in other cities-think of it like Band-Aid for press freedom.”

This entry was posted in 2016, Journalism and tagged Journalism, Journopalooza, music, Washington D.C.. Bookmark the permalink.