While the United States World War One Centennial Commission was established  by Congress in 2015, it wasn’t funded. On the anniversary  PBS’ American Experience will start a six-hour documentary over three nights. The Library of Congress had a small poster exhibit “World War I: American Artists view the Great War.”

In popular culture, World War I never died. Charles Schultz’ Charlie Brown cartoon had Snoopy, the popular dog who thought he was a fighter pilot against the German “Red Baron” von Richthofen.

Filmmaker George Lucas gave us the Indiana Jones series of movies but also the television series, The Young Indiana Jones Chronicles. Jones served under an alias in the trenches, and later as an intelligence agent. Circling back to reality, Lucasfilm provided documentaries on the DVDs along with the fictional episodes. Speaking personally, I shared them with my young nephew and niece at Xmas and they were fascinated by the fiction and reality.

In the real world, the declaration of war by a reluctant President Woodrow Wilson swept  up young American men and send them to the muddy battlefields of Europe. Over 4 million served; 53,402 soldiers died in battle.

Our involvement in World War I went from April 1917 to November 1918 – a year and a half. US troops participated in major battles such as Chateau-Thierry and the Marne. 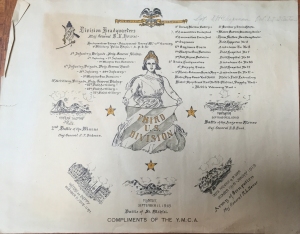 As shown by an earlier posting on Norman Prince, Americans were headed “Over There” earlier than April 1917. The Lafayette Escadrille consisted mostly of American volunteers.

Even before 1917 there had been a consideration of a “draft” or what it became known as, the “Selective Service Act of 1917.” Wilson may have wanted a volunteer force but reality bites: not enough men signed up. So the draft went into effect in May of 1917 with the registration of young men. Many would not return to the until 1919 or later.

On the Commission’s website is a register of events for World War I commemorations.

A memorable part of World War I were the poppies that flourished in “Flanders fields” . The Centennial Commission created “WWI Poppy kits” to raise funds to build the planned  National WWI Memorial in Pershing Park in Washington D.C. General John J. Pershing was the WWI commander, only the second “General of the Armies,” a six-star general, in U.S. history.

The other one? George Washington.